Polaris and Ski-Doo lifted the covers off their 2008 race sleds at Haydays in September, and, in compliance with new rules for stock-class racing, both sported a new 600cc, carbureted engine.

While neither engine uses new technology, we expect both are likely to make their way into the 2009 consumer snowmobile lineup, likely with new fuel induction technology. These two sleds already have more of a consumer feel than previous factory race sleds, which was part of the point with the new rule: make a tough sled for racing, but one that can adapt to a life off the snocross track when a racer sells it.

Ski-Doo’s sno-cross race sled is the MX Zx 600 RS, which stands for “Racing Special.” The engine is based on the Rotax 600 H.O., but with new cylinders and head, VForce reeds, Mikuni TMX-38 carbs with powerjets and a tuned pipe. There is no oil injection. It puts out an estimated 128 hp.

The sled shares the same chassis and hardware as the consumer-based MX Z 600 HO SDI X, with the exception of extra tunnel bracketry, clicker shocks and a stronger drive axle and jackshaft. Hillclimbers will have their own REV-XP Summit for racing.

The Polaris snocross-specific snowmobile has an all-new Liberty 600 engine, and is not a derivation of the Liberty 600 HO or a bored 440. Polaris snowmobile product manager Michael Erickson was coy as to horsepower numbers, but we expect it to fall in the same range as the new Rotax in Ski-Doo’s race sled.

Other changes to the 600 IQ Race Sled include a redesigned cooling system with a new flow pattern, and EZ Steer steering system for less steering effort and more durability.
The Arctic Cat race snowmobile will be released at its race school in November; expect to see a new chassis. Yamaha will run a race version of its FX Nytro in open-class racing. 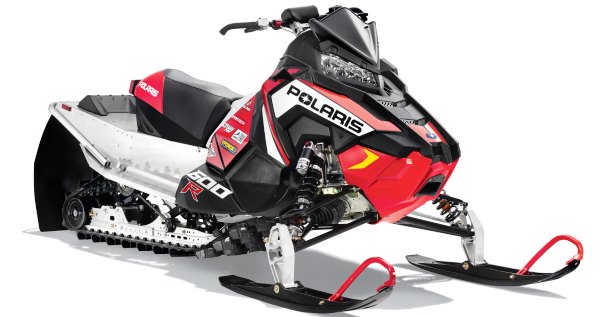