Shock absorbers are packed full of cutting-edge technology and if built right, they will do an amazing job of separating a rider from all of the junk a snowmobile trail can dish out. So when we caught wind that new snowmobile shock technology was on the horizon from RydeFX, we sat up, took notice and promptly asked for a sample before it hit the market.

ArvinMeritor – RydeFX’s parent company – obliged our request last fall to test a prototype set of its new Air 2.0 shock absorbers. We hung them on our 2007 Polaris 600 HO CFI IQ and quickly learned that the Toronto, Ontario-based company has raised the bar for performance from a springless snowmobile shock absorber.

For part of our test we rode 220 miles side by side with a 2008 Polaris 700 SwitchBack that had standard coil-over RydeFX shocks, and we noticed a better ride from the 600 IQ’s Air 2.0 shocks.

Their most impressive performance was in small chop and moguls up to about 18 inches deep. The front end followed the contour of the bumps and trail but never made the IQ front end feel lazy. The shocks passed on minimal or no feedback to the handlebars.

RydeFX Air 2.0 shocks are different than the original springless snowmobile shock – the Fox FLOAT – in two ways. First, the RydeFX shock is manufactured with nitrogen as a spring rather than oxygen. Secondly, the 2.0 has two air chambers to create a dual-rate spring package engineered for good compliance over small bumps along with superb bottoming resistance for aggressive riders.

Air 2.0 shocks work in a three-stage process to absorb bumps. The large, 47mm cylinder can be filled anywhere from 50 to 100 psi of nitrogen or oxygen and it manages up to about the first 1.5 inches of shock stroke.

As the shock is pushed farther into its stroke (1.5 to 4 inches), gas pressure in the large cylinder ramps up to the level of the smaller, 37mm cylinder; which is calibrated to about 170 psi.

As the shock moves into its last inch of stroke, stage three, pressure within the smaller cylinder significantly increases to prevent suspension bottoming. This is similar to a rubber jounce bumper used on many coil-over shocks.

Nitrogen pressure builds up to create a spring rate of nearly 1,800 pounds. While that much pent-up pressure seems like it would cause the nitrogen to blow past the shock’s internal floating piston (IFP), our shocks never failed during more than 500 often-brutal and hard-charging test miles.

The 2.0’s slow-speed chamber is tunable for a rider’s weight, riding style and trail conditions; it also allows the suspension sag to be set for the rider and machine. Less nitrogen pressure allows the front end to sit farther into its travel and help the sled corner flatter.

Our shocks came from the RydeFX factory with 65 psi in the slow-speed chamber, but that was too stiff. The shocks wouldn’t compress on 1-foot moguls even if struck at more than 50 mph, which caused the sled to rock from side to side and gave an overall harsh feel.

We dialed back the slow-speed chamber to 60 psi, which made them significantly more supple over small moguls while they retained a smooth transition to the high-speed chamber.

In addition to performance, image is important, too. Air 2.0s are a knockout in the looks category. We received many compliments about our rented shocks last winter. The sleek, polished-aluminum bodies look high-tech and they’re highlighted by a cool decal.

Air 2.0 shocks are standard on 2008 Polaris Dragon models. They’ll be available this fall for most late-model Arctic Cat, Polaris and Ski-Doos. For our money, RydeFX’s new shock is worth the investment. 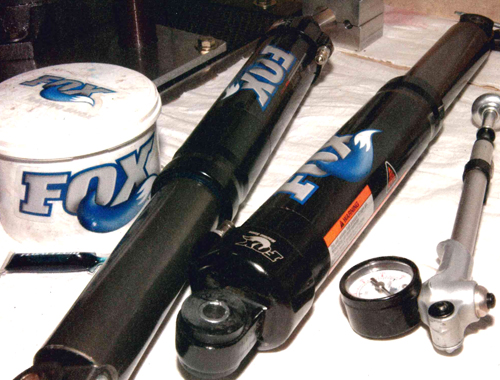