To turbo, or not to turbo? The question may not be as engrossing as the Hamlet’s “to be, or not to be” soliloquy, but it’s a perplexing question nonetheless for any Arctic Cat fan seeking a four-stroke snowmobile.

For 2011, the question gets a bit more difficult, as Cat has now added a Z1 Sno Pro to its lineup, matching the features of the Z1 Turbo Sno Pro. Sitting side-by-side on the trail, the machines look remarkably similar, with the same chassis, ergonomics, skis and other features, and both are available in either orange or green, with a big, snarling Cat head on the side.

A glance at the spec chart will give the potential buyer further cause for pause: The machines seem pretty much identical here too, with the same bore, stroke, suspension descriptions, brakes, fuel capacity – pretty much everything.

A closer inspection reveals a different hood between the two machines – the Z1 Turbo needs more clearance and airflow up front for the intercooler. The only spec difference, other than the turbo charger being listed with the exhaust details, is a slightly smaller (yes, smaller) throttle body on the Turbo model versus bigger, twin throttle bodies feeding the normally aspirated engine.

So are they identical beneath the plastic? Hardly. Cat engineers treat these like two completely different machines when it comes to everything from clutching to carburetion, suspension setup to drive belt choice.

The two machines share the same base powerplant – sort of.

Under each hood is a 1056cc, liquid-cooled, parallel-twin four-stroke from Suzuki. It has four-valve heads, dual overhead cams and dry sump lubrication, with a 98mm bore and 70mm stroke, full transistor ignition system and fuel injection.

One version of the engine makes 123 hp, however, while the other makes 177 ponies. The difference, of course, is the boost.

Think of the turbocharger as an exhaust-pressure driven air compressor that builds pressure with speed and stuffs more oxygen into the cylinders. The oxygen, is matched by more combustible fuel.

On the Z1 Turbo, the turbo is always spinning and is always available to provide extra airflow to the engine, according to Cat engineers, so there is no lag or irritating wastegate sound like on Polaris turbo models. The amount of boost provided is determined by the engine rpm, and thus the driver’s input on the throttle. Maximum boost is 10.5 psi at 7200 rpm and over. The whole process is controlled and mapped in the electronic control unit (ECU).

Because the compression of the air through the turbo charger also heats that air considerably, an intercooler is needed to bring the air temperature back down before it is stuffed into the engine, and the intercooler needs a lot of air. That necessitates a taller hood with more frontal airflow on the Z1 Turbo Sno Pro, while the Z1 Sno Pro shares its hood design with other Twin Spar chassis sleds.

The base model has strong power, comparable to a 600-class two-stroke, but the turbo application is more of a hypersled – with more pull than any stock snowmobile on the market. That means the Z1 Sno Pro and Z1 Turbo Sno Pro require differing settings.

Inside the engine block, the cams, pistons and connecting rods are different between the two engines due to the extra strain brought by the turbo-charger.

In may seem counterintuitive, but the Z1 Turbo actually uses a smaller (46mm), single throttle body to deliver the fuel versus the base Z1, which uses dual, 48mm throttle bodies.

Because there is a small amount of boost right off the bottom, Cat engineers explained, the initial engagement and acceleration of the Z1 Turbo with the larger throttle bodies was abrupt and harsh. The smaller throttle body allows for smoother low-speed driveability and a more linear relationship between the power delivery and the throttle position while still maintaining peak power.

Working down the driveline, the clutches handle the power first. Compared to the Z1, the Z1 Turbo uses a different spring and significantly heavier weights in the primary clutch, plus a slightly shallower helix in the secondary clutch. They share the same spring in the secondary.

A stronger drive belt is used on the Turbo version to accommodate for the power boost and for more heat resistance.

Next, the power is sent through the ACT Drive, where the Z1 has a 57/63 ratio while the Z1 Turbo pulls a much higher 66/54 ratio. The higher ratio, of course, is enabled by the power – think of it in terms of an 8-year-old biking up a hill versus Lance Armstrong (with or without blood doping). The kid’s going to be selecting a lower gear!

Also under the hood, stronger motor mounts are used on the Z1 Turbo to deal with the additional torque of the engine.

Cat doesn’t release official weights, but common sense tells you that adding a turbocharger and intercooler, along with related plumbing, will make the Z1 Turbo Sno Pro heavier than the base Z1 Sno Pro. We’re told the Z1 Turbo weighs about 40 pounds more than the Z1. Common sense also tells us that a 177 hp sled can and often will hit bumps harder than a similar sled with 123 ponies.

Therefore, different suspension settings are needed. That’s why, on the sister LXR models, the Z1 uses 120-pound springs on the front suspension, while the Z1 Turbo utilizes 145-pound springs.

The Sno Pro models, however, utilized Fox FLOAT 2 air shocks up front, so the difference there is controlled through different stock air settings.

The LXR models also use different tracks to accommodate for the power difference – a Hacksaw with 1-inch lugs is used on the Z1 LXR, while the Z1 Turbo LXR has a 1.25-inch Rip Saw. Both Sno Pros, however, use the 1.25-inch Rip Saw.

Same, Yet Different On The Trail

We tested the Z1 Sno Pro and the Z1 Turbo Sno Pro separately at the 2011 Rode Reports, and have stories on each in upcoming issues of Snow Goer. While they definitely have differences in their respective powerbands, the machines share many traits on the trail.

Both are very stable and well suspended, with a wide and planted feel when going down the trail. The adjustable seat and handlebars that are standard on many Cat models allow riders to dial in their ergonomics, and low windshields look cool but block very little wind.

When the throttle is pinned on a straightaway, however, the difference couldn’t be more obvious. The Z1 Turbo absolutely sings, thrusting the machine forward with a thrill that is hard to match. The Z1 still gets up and goes, but it feels more trail friendly and linear.

The other big difference, of course, is price. The Z1 Sno Pro lists for $11,199, while the Z1 Turbo Sno Pro has an MSRP of $13,999. That’s certainly a big difference, but adding 54 horsepower any other way would likely cost a lot more, and it would void your warranty. 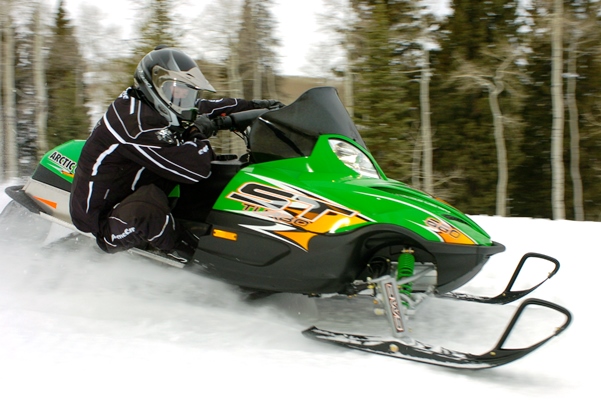