Snowmobiling wouldn’t exist the way it does in North America without the tireless efforts of many key people, organizations and businesses, and some of them will be honored this fall with special recognition by the International Snowmobile Hall of Fame in Wisconsin.

A snowmobile dealership, trail groomer operator, snowmobile club and longtime business within the industry will all be honored when the 2019 Hall of Fame class in enshrined in September. (To read more about the grassroots folks who made the 2019 class, click here.) Honored in specialty categories will be the Rob’s Performance Motor Sports dealership, the Barnstormers of Sayner snowmobile club, groomer operator Steve Wolfe, and International Engineering & Manufacturing/Woody’s Traction.

A sometime forgotten but often vital part of the snowmobile infrastructure are dealerships, and the support they give to local clubs. To honor them, ISHOF initiated the Dealer of the Year program last year, sponsored by Snow Goer magazine. The second-ever recipient of the honor is Rob’s Performance Motorsports in Johnson Creek, Wisconsin.

“This Ski-Doo dealership can count 35 years of award-winning sales and service to its customers,” the ISHOF support materials state. “Located in the small town of Johnson Creek in Southern Wisconsin, its reputation for quality spreads throughout the state. Rob Strauss, owner, strongly believes in the value of clubs as being necessary for the sport to grow, prosper and survive. Over 90 percent of the dealership’s many team members are members of area snowmobile clubs. Over 40 area clubs and associations have benefited from his generosity to the tune of more than $10,000 in contributions for support this past year alone. The dealership has won 17 Ski-Doo District, 7 Ski-Doo Regional and 4 Ski-Doo National Dealer of the Year awards.”

The Barnstormers of Sayner – a historic snowmobile club located in the Wisconsin Northwoods sledding hub – will be this year’s International Snowmobile Club of the Year honoree.

“Born in 1967 in Henry Sayner’s barn – thus the name Barnstormers – and chartered in 1969, this club now celebrates 50 years of life,” the Hall of Fame writeup of the award states. “Its original 37 members have now grown to over 280. They come from all over the Snowbelt and four states. The club grooms 80 miles of trails, 95 percent of which are located on DNR land.

“Their location is central to six different towns giving them the name ‘The Hub of Vilas County’ as their trails all interconnect with these towns. Grooming funds come from five yearly fundraisers with some of the proceeds also being donated to six different local charities. A website keeps members and snowmobilers informed of the club’s activities. Being located in Sayner, home of the Eliason snowmobile, the first personal-sized snowmobile built in 1924 and on display there, helps the club bring many visitors to their trails.”

Steve Wolfe of Arbor Vitae, Wisconsin will be recognized for a lifetime of grooming and now grooming leadership with the International Groomer of the Year Award, sponsored by Arrowhead Groomers & Tracks Inc.

“Steve caught the grooming bug early when he used a bed spring to groom trails in Chaseburg, Wisconsin, back in 1977,” the writeup on the Hall of Fame website states. “That passion continues today but now he is in charge of 30 volunteer groomer drivers and supervises 90-plus miles of trails. He also trains, schedules and does the necessary paperwork needed to administrate the state-funded trail system for two counties. Not one to pass off the long nights in a groomer, Steve also takes three shifts each week to keep in touch with the process.”

Wolfe is also recognized for his efforts as a snowmobile safety instructor as well as his work with landowners, stakeholders and county and state officials to improve the grooming program and fine-tune its functions.

Earning the Edgar Hetteen Memorial Award of Merit in 2019 is Woody’s/International Engineering and Manufacturing of Hope, Michigan.

The company, established in 1968 by Jim Musselman and Woody Kozlow, started small but has become an industry giant with more than 25 U.S. and Canadian patents.

“Using their metallurgy skills and knowledge, they soon developed a carbide runner followed shortly with a carbide-tip stud for the racing side of snowmobiling,” the Hall of Fame release says. “These two products set the standard for traction control that remains today. Now, under the 3rd generation of family ownership and leadership, the company has grown to 53 full-time employees. Their traction control products dominate both the racing and recreational needs of snowmobilers. Their quality products are produced and marketed with high integrity.

“Attesting to their success is the fact that the people in leadership at Woody’s are snowmobilers. They ride. They are recreationists. They have a passion for the sport and for producing quality products for their customers to enjoy with added safety,” the release says. The Hetteen Award is sponsored by the family of Elmer Cone, the founder of the International Snowmobile Hall of Fame. 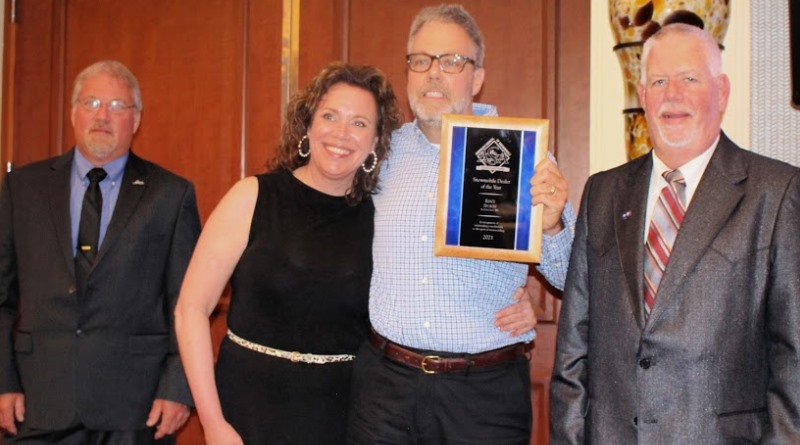