Before there was a REV chassis, and even before the ZX platform, Ski-Doo renewed itself in the mid 1990s with the S-2000 platform. Notably lighter and better handling than the F-2000 chassis it replaced, the S-2000 setup brought Ski-Doo up to par with the other brands and started the momentum that would eventually lead the company toward market share dominance.

In the March 1996 issue, the 1996 Ski-Doo MX Z 600 was recognized as the Snow Goer Snowmobile of the Year. Below is the article from that issue. Once in a very great while, a machine comes along that immediately stirs the snowmobiling industry. The Vmax 4 did it. The ZR 440 did it. The XLT Special did it – twice in fact.

Yet few machines have raised as much immediate consumer interest as the MX Z 583. People were immediately drawn to the bright yellow rocket that promised to be a trail taming dream ride. The expectations were really quite high.

We were in the fortunate position of being able to ride one of the prototype machines. Like the others, we were also drawn to the machine when we first saw it. It sat so much lower than traditional Ski-Doos, thanks to the S-2000 chassis. It featured a funky-looking rear suspension and a color that grabbed attention. Neat, we thought. But after we took it out on the trail, we fell hopelessly, madly in love. In fact, lust may not be too strong of a word.

What’s so great about this machine? Well, it’s a terrific combination of race sled and trail sled for the aggressive trail rider. It is light in weight and steers like no other Ski-Doo before it. It also has a long-travel rear suspension, the SC-10, to suck up the bumps and keep the rider in control.

All these impressions were drawn at our 1996 Rode Reports and, since then, Ski-Doo officials have only made the machine better. By adding the adjustable ACM control, Ski-Doo partially coupled the torque and trailing arms of the suspension. The engine is the popular 581cc Rotax liquid-cooled twin with rotary valve, RAVE and two 40mm carbs.

The bottom line is this: Not only is this an awesome machine, it’s also leading a Ski-doo resurgence that is exciting to watch. With this sled at the helm, Ski-Doo is hoping to again capture the hearts of a majority of snowmobilers. Well, they are off to a heck of a start! 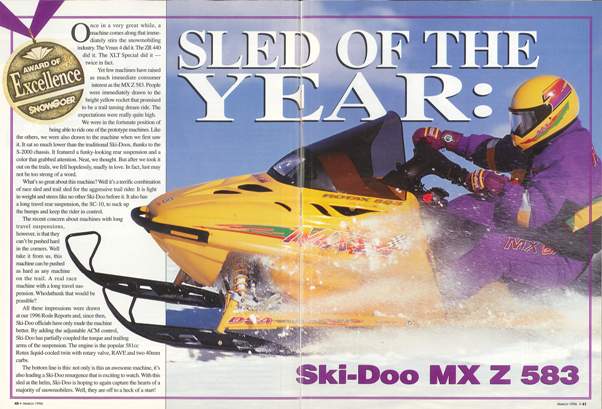