EDITOR’S NOTE: In a matter of days, the most historic snowmobiling event in decades will begin Eagle River Wisconsin — the Amsoil Eagle River World Championship Snowmobile Derby January 17-20. We’ll preview the event many different ways. Today, we look back on the event’s history in this article, first printed in the December 2012 issue of Snow Goer magazine.

For 49 years, they have gathered here every winter. Racers from across the North American Snowbelt, hardcore fans from nearly as far away, Joe Average trail riders, media members, historians and curious onlookers. What started as a marketing tool for local tourism and the effort to capitalize on a new sport has grown into snowmobiling’s most high-profile and historic event.

The Eagle River World Championship Snowmobile Derby is a celebration of all things winter. Yes, it’s a race — the most celebrated in the history of snowmobiling. But it’s also a massive event that increases the residency 10-fold-plus of the tiny town of Eagle River, Wisconsin, (population: 1,443) for a few days every winter. Fireworks shows, vendor displays, demo rides and a carnival-like atmosphere make it unlike any other winter event. It’s also held in a hotbed for snowmobile trail riding. Many snowmobilers bring their sleds to the Eagle River area every winter, stay at resorts scattered throughout the Northwoods and spend part of the extended weekend trail riding. Some even ride their sleds directly to the track to catch various parts of the weekend’s activities.

At the purpose-built facility, racers begin competing three days before the World Championship final in a variety of classes on both the high-banked, iced-oval and on the big-air snocross course on the infield.

It all culminates on Sunday with the running of the World Championship race at 3 p.m. From the professionally sung national anthem to the introduction of the drivers, the military flyover to the ceremonial touching of the Snow Goer Cup (the Stanley Cup-esque traveling trophy), the folks at the Derby know how to build suspense. By the time the high-pitched Champ 440 oval racing sleds are lined up on the front-stretch for the World Championship race, the excitement is palatable. The speed and precision of the drivers is awe-inspiring — even folks who normally aren’t drawn into motorsports can’t help but to be sucked into this 30-lap event.

For 49 winter Sundays, it has been this way. For the 50th, the host Derby Track officials are bringing back most of the past champions, adding even more sideshows and upping the purse for which the racers compete. There will be no better place to be on Sunday, January 20, 2013, than trackside in Eagle River, Wisconsin.

The first Eagle River Derby was a labor of love, and necessity. In 1964, John and Betty Alward, owners of the Chanticleer Inn resort near Eagle River, and local publicist Walt Goldsworthy were looking for a way to attract winter vacationers to the area. John Alward in particular was interested in adding a quirky new product called a snowmobile to the event after buying a pair the year before from Arctic Cat snowmobile distributor Sparky Meyer. The Alwards and Goldsworthy cooked up a plan for an outside winter festival on the tiny, frozen Dollar Lake on the edge of the Chanticleer Inn’s property, and then hooked in Meyer. Goldsworthy created a press release, Betty typed 50 copies, Meyers banged on the phone to get support from the fledgling snowmobile industry and the Alwards networked in town to prepare for the event.

The goal? Attract maybe a dozen snowmobiles and 50 or so spectators to what was then dubbed “The World’s First Snowmobile Derby.”

“We didn’t know how many people even had these silly little machines,” recalls Jake Alward, the son of John and Betty Alward who was then 16 and now owns and operates the Chanticleer Inn.

The reality? Several thousand spectators and more than 100 drivers with sleds showed up. There was much media coverage, Miss Wisconsin attended and the local Rotary club quickly ran out of food at the concessions. The event included log-pulling competitions, slow-speed ski-joring behind the snowmobiles and a (very) slight hillclimb race on a berm on the shores leaving Dollar Lake. But most notable was the cross-country obstacle course. “They started out on the lake by maybe 100 or 200 feet, then they came along the pier and went up the hill,” Jake Alward recalls. “Then those that made it up the hill — and it certainly wasn’t all of them — would turn left, go across the top and then down the other side, where they had to make a hairpin turn at the bottom. That wasn’t easy on those machines, because all they wanted to do is go straight! Then they went back through the woods — we had trails designed for our snowmobile rentals that wound through the trees on the 40 acres of our property. Then they ended on the lake again.”

There were several class winners that day, but when organizers decided the event needed an overall champion to appease the assembled media, they somewhat haphazardly selected 13-year-old Stan Hayes of nearby Crandon, Wisconsin, because, according to legend, they thought his would be the most interesting story.

The second annual event was called the National Snowmobile Derby. It included a long cross-country race connecting towns on a newly constructed snowmobile trail, attracted more than 5,000 people and had so much media coverage that organizers had to create a media tent. For 1966, the event was moved off of Dollar Lake and onto land on the north end of town, and the name “World Championship Snowmobile Derby” was registered with the state, along with Eagle River’s claim as “Snowmobile Capital Of The World.” By 1968, the crowd had grown to an estimated 20,000 people — more than most NASCAR races at the time.

By 1969 the Eagle River World Championship Snowmobile Derby was a runaway success, attracting factory support from countless brands, featuring sideshows that included the Polaris Thrill Team, distance jumping, parades through town, international media coverage and drawing more than 35,000 people to the Sunday finals. For 1970, there were factory-backed teams from Arctic Cat, Polaris and Ski-Doo, but also Alouette, AMF, Rupp, Scorpion, Sno Jet and Sno-Pony. Through the ’70s, dozens more brands were added. Snowmobile racing in general was super popular, but Eagle River was the ultimate prize.

Over snowmobiling’s history, many innovations were either launched at the Eagle River Derby or tested on sleds in advance of the race in an effort to win the World Championship. Independent front suspensions, traction products, fuel injection, various ignition systems, variable exhaust valves… the list goes on and on. Many fans have been to a World Championship back in the day. Some of the pageantry is the same, and the racers still compete on the same track on the north edge of town. Yet a lot has changed in the last 20 years.

The facility itself has grown up. Huge, permanent hospitality buildings now run along the perimeter of the track. Some are purchased by sponsors who host dealers or customers in private booths, like the luxury boxes in pro football stadiums. Along the frontstretch, the long main building is now dominated by “hot seats” — bench seating inside a comfortable, heated building. It’s an upcharge, but you don’t have to stand on the hill on a winter weekend.

Behind that building is a 12,000-square-foot — exhibit hall. It houses many vendors selling snowmobile gear and accessories, has food options, offers heated restrooms and even has a bar and a gift shop. Plus, it’s a great place to warm up if you don’t take the hot seat option.

On the banked oval track, racing occurs in a wide variety of classes. The Champ 440 sleds that run for the World Championship are low-to-the-ground, sleek, custom-built race machines. But over the weekend, racing occurs in a variety of classes — from stock snowmobiles to juniors, women’s classes to the unique Outlaw 600 class, which features essentially super-powerful go-carts on the ice. Growing in popularity every year are the Vintage classes, with rebuilt sleds from yesterday bombing around the track in impressive fashion. Sno Jets and TX-Ls, King Kats and Sno Twisters, Chaparrals and Rupps… you name it, it’s there.

Between oval races, different classes run on the rugged snocross course on the infield.  Again, multiple classes of skypilots compete, from the kids 120 racers to pro snocrossers.

If you bring your sleds and plan on riding part of the weekend, there are three can’t-miss times to be at the track. First, it’s the Friday Night Thunder program, a compact, high-energy thrill show under the lights featuring multiple classes of racing, a fireworks show and Champ 440 sleds running for the pole position in Sunday’s World Championship. Saturday afternoon is World Championship qualifying, a multi-round format that sets the front row for the title race.

Then, after a full day of racing in other classes on Sunday, the World Championship race begins at 3 p.m. The tension before the race is intense, and when the green flag releases the snowmbiles, the roar of the engines is deafening as the racers pour into turn one and trade paint. The racers top 100 mph at the ends on the straightaway, then pitch their custom race sleds through the turns, using different lines to try to find the most efficient way around the track. After 10 laps, the race is stopped, and the race sleds are lined up on the front stretch in front of the fans. Each team has 5 minutes to make minor adjustments — belts are checked, carbide runners are replaced and adjustments are made. Soon a horn sounds, and the sleds are lined back up in order for a 20-lap charge to the checkered flag. Passes for the lead in the last five laps have become the norm in recent years, creating even more suspense. When the race ends, there are always tears of joy, sprayed champagne and much jubilation by the winning team; those who come up short wear steely looks and pledge to be back next year. For 49 years, it has been this way. There may not be 45 different brands going for the championship like in the 1970s, and the twin-trackers of the 1980s and ’90s are long-gone. But the Eagle River World Championship Snowmobile Derby remains this sport most prized and historic event, and the 50th should be grand.

EDITOR’S NOTE: Don’t miss our look at each of the previous 49 race champions. 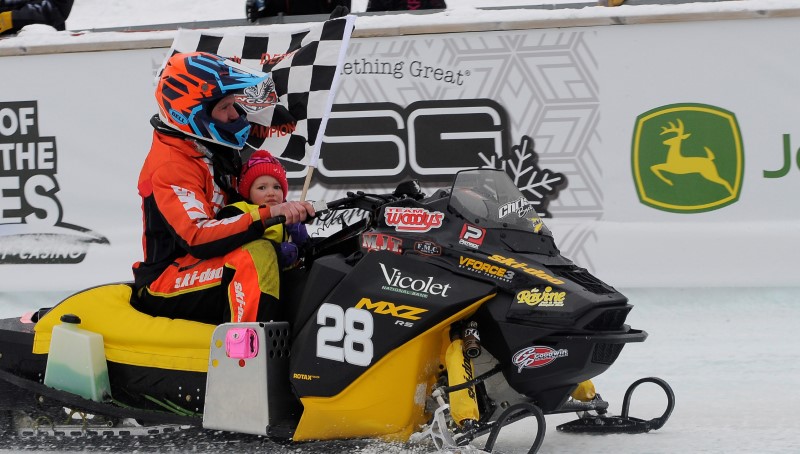