The Camoplast Ice Claw snowmobile track  features 240 carbide-tipped studs in a 121-inch track. Track lengths are also available in 136-inch versions. The stud bodies are made of aluminum and are molded into conical-shaped, 1-inch lugs. According to Camoplast, the studs add 0.6-pound to the track, and have 15 scratch lines.

Eager to see for ourselves how the track worked, we installed an Ice Claw on our 2005 Yamaha RX-1 demo snowmobile.

After our season of testing, the Ice Claw fits the description of a hybrid track. We found that the Ice Claw provides traction when you need it, but doesn’t offer resistance when you don’t. In most hard-pack situations on the trail, we had a hard time determining if we had a studded track at all. We enjoyed being able to slide the rear of the sled to help get set for corners, for example.

The chief benefit of stud use is safety, as it improves control during braking and decreases stopping distances. The Ice Claw performance is best for these situations. The best traction with the Ice Claw came during braking on icy surfaces, exactly when we needed it.

The studs don’t protrude far enough to be of great benefit in hard-pack conditions, as just the carbide tips are exposed. However, those same carbide tips extend far enough to scratch into conditions that don’t allow track lugs to penetrate, such as ice or on cold mornings when trails are really firm. We noted increased performance in both acceleration and braking compared to unstudded tracks in these conditions, and we especially appreciated the increased braking performance. At higher speeds, however, the Ice Claw will not match the performance of push-through studs with longer extrusions.

We also noted that the track seemed quicker to lose traction on paved surfaces than a track with push-through type studs. And yes, a spinning Ice Claw will damage a garage floor just the same.

At the end of the season, we did not have any of the studs missing or lugs torn. Most of them remained sharp, and Camoplast said the studs can be sharpened like conventional carbide studs.

While the studs were durable, our track lost most of the track clips. Camoplast Sales and Marketing Manager Bruce Dashnaw said there was an early production problem with the track clip design. The original design had four holes in the clips, and in some conditions the clips would crack and fall off. Camoplast said only a small number of tracks were affected, and later Ice Claws had a new clip design. We looked at remaining clips and our test track was indeed outfitted with the four-hole clip design. Interestingly, even without the track clips, the hyfax showed little or no sign of excessive heat from running on the rubber.

This track may be a great compromise for those on the fence about stud use. Traction on hard trails felt comparable to a normal, unstudded track yet the stopping and acceleration traction were both increased. It’s a hybrid track that offers the safety benefits without the sticky-in-the-corners feel that many riders don’t like about conventional studs.

The Ice Claw isn’t for riders wanting an aggressive snowmobile track. Camoplast does not position this track as a replacement for a conventional track with push-through studs, either. It’s primarily for less aggressive riders who want to improve safety and have improved traction while braking and accelerating. 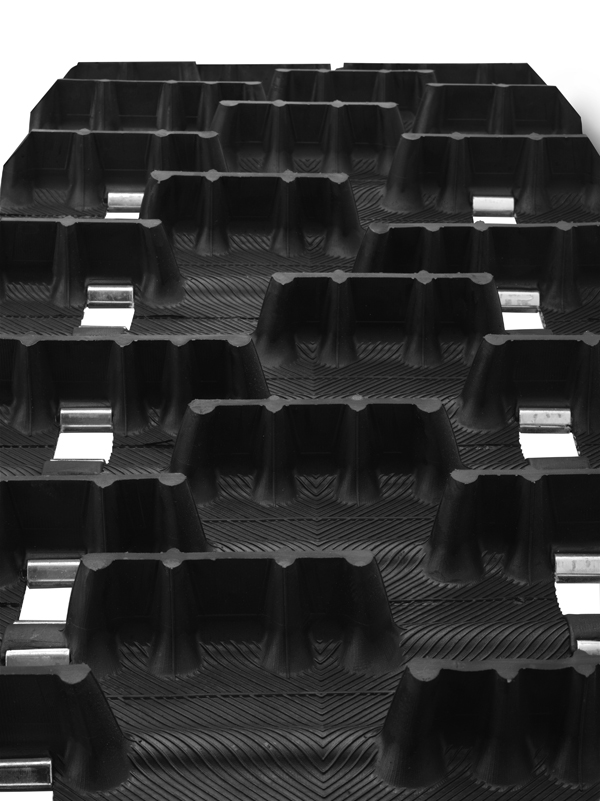