While most snowmobile riders have pushed their sleds to the back of the garage this spring and are hitting the local 18 for their season’s first round of golf, this is the time of year when snowmobile manufacturers are putting the finishing touches on their new models before they go into production this summer or early fall. Looking back 20 years from today, Arctic Cat must have been finalizing details of its jaw-dropping Thundercat.

The musclesled class was starting to gain speed — literally and figuratively — during the early 1990s, and the 1993 Arctic Cat Thundercat led the league in displacement with a 900cc triple-cylinder engine. Other class competitors in 1993 were the Polaris Indy Storm that had a 750cc triple-triple, Ski-Doo’s Mach Z had a 780cc triple-triple with RAVE variable exhaust, and Yamaha’s 750cc Vmax 4 had four cylinders that fed into two exhaust pipes.

The reed-inducted Suzuki that powered the Arctic Cat Thundercat had three, 38mm Mikuni carburetors and a set of triple-tuned exhaust pipes that bellered a wicked note when it blazed across a lake. Output was in the neighborhood of 160 hp.

The 1993 Arctic Cat Thundercat was built on the then-new AWS III chassis with a 39-inch ski stance and 7 inches of suspension travel up front. The rear end had the FasTrack rear suspension — first introduced on some 1992 Arctic Cat snowmobiles — with 8.5 inches of travel.

Snow Goer magazine conducted an owners’ survey about the 1993 Arctic Cat Thundercat and published the results in the February 1994 issue. As expected, the most talked about feature of the Thundercat was its engine. With 5 being the top grade a category could achieve, the Thundercat scored a 4.9 in both acceleration and top-speed categories. Throttle response scored a 4.8 out of 5.

“[It’s] a factory-built stock sled that goes over 100 mph without putting on pipes, polish, porting, cutting heads and walking home a lot. I really liked the performance this sled delivers,” wrote John Green of Viroqua, Wisconsin. “There is no wonder about the thunder here.”

Oddly, the Thundercat speedometer registered up to only 100 mph, so riders had to estimate their machine’s top speed. When Snow Goer tallied the survey respondents’ results, the average top speed was 118 mph, even though speed-runner Jim Dimmerman set a snowmobile speed world record of 113 mph in 1993 on a Thundercat. Hmmm …

Along with the 1993 Arctic Cat ZR race sleds that debuted in the fall of 1992, the Thundercat also used the super-sticky Wilwood hydraulic brake for Arctic Cat, and owners raved about it. “This brake could stop a tornado in the sky,” Green said. “Everyone that drove [my sled] loved it.”

Owners described the Thundercat chassis as solid, safe and stable, which is especially important to bring it down from the high speeds that the Thundercat could reach. “I was really impressed at how well it handled in all conditions,” said Alan Schroeder of Morris, Manitoba.

Some of the sled’s stability was due to its weight, which was reportedly near 600 pounds. “The overall feel of the sled I really enjoyed. It handles very well …” said Milton Flickinger of Annville, Pennsylvania. “I do wish there was a way to drop 50 pounds off the sled.” Another owner said it was difficult to move the sled when loading or moving it in his garage.

There’s no doubt that the 1993 Thundercat was an instant classic because of its behemoth engine and bright pink graphics, and it was part of a golden era of snowmobiling. By the early 2000s, the triple-triples had passed out of fashion as snowmobilers were clamoring for machines powered by lightweight, twin-cylinder engines. Arctic Cat ceased production of the Thundercat snowmobile after the 2002 model year, but the name recently enjoyed a resurgence as part of Arctic Cat’s 2008-10 ATV lineup.

Which 2013 snowmobile do you think will be a classic 20 years from now? Post your comments below. 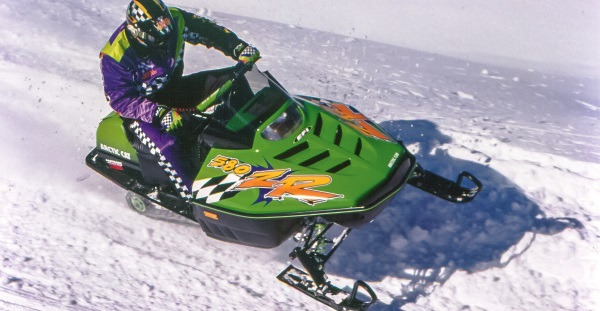