Forty-six years ago, an earlier version of the Snow Goer staff was working in the late summer to get their season-opening issues of the magazine shipped to the printer, just like the staff is today. And, sometimes the messages are even the same – like the importance of understanding the grassroots network and joining a snowmobile club.

Below you will find excerpts from the Opinion column from the October 1970 issue of Snow Goer magazine – seemingly authored by then-editor Gene Schnaser, though it contained no byline. To help put you back in the day, we’ve included some cool advertisements for 1971 snowmobiles found in that same issue. Enjoy! And, if you don’t belong to a snowmobile club yet, check out this link for details on how you can join.

The Snowmobiler – Can He Be An Organized Man?

In The Beginning, the First Snowmobiler was a Maverick.

He used his First Snowmobile to break away from long winter hours of cards and checkers and television to hit the backwoods trails to groove on the direct challenge of Man against Nature. Then one day someone saw the Maverick getting his kicks in the open, though frosty, air while all others were sae inside their heated homes. So he searched and found a snowmobile too, and roared off to join the First Snowmobiler 30 miles into a big national forest.

The Maverick was broken up. “I’m no longer along and must share winter with a Second Snowmobiler!” He opened his throttle to abandon his new companion, but his engine wouldn’t start. So Second Snowmobiler towed First Snowmobiler back to town. “Yeah, man,” said the Maverick, “we should ride together. We should start a snowmobile club, you and me!” So it was, with this primitive relationship of two snowmobilers and machines, that the first snowmobile club was formed.

Today we know there are more than 1,500 snowmobile clubs in North America. If a good bunch of the million owners today bought their first machine to break away from the crowd, they changed their minds in short order. Once of the most frequent requests we get at Snow Goer starts out, “Dear Sire: A bunch of us here are thinking of starting a snowmobile club, and we were wondering…” It’s called the phenomena of belonging. Like the beatniks of the early ‘60s and the hippies today who profess non-conformity but end p conforming in the end. Yes, a lot of snowmobilers are joining the club scene and becoming “organized” men by the numbers. But they like it that way. If there’s one outstanding characteristic of North Americans, it’s their savvy of banding together so they have more strength to accomplish more. This is true whether their objective is work or fun.

The lone snowmobiler sacrifices a load of fun and opportunities. Not belonging to a club means he missed the opportunity to participate in such things as organized races, rallies, rescue training, picnics, ice fishing derbies and conservation work. Take these away from most club members of at least a year and they’d probably sell their machines. Beside these events, more and more clubs and sponsoring big trips to a snow paradise such as West Yellowstone and other beautiful hard-to-get-to places, getting special group rates through airlines and railroads. The loner is left alone. 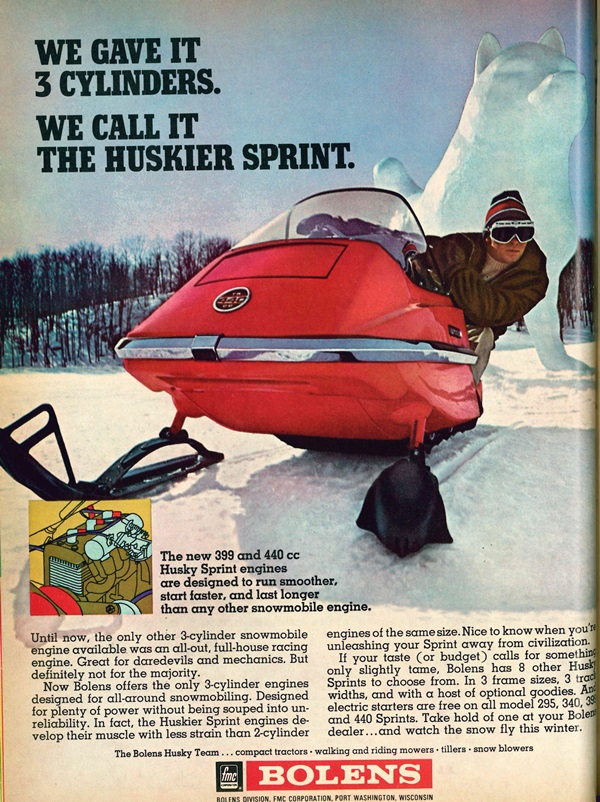 At meetings, a snowmobile club can take advantage of the one thing they definitely possess: a group of enthusiastic snowmobiles in one place at one time. Last season, more than 20 films were offered by companies for free group showings. Because he represents a club, a fireball organizer can often get full cooperation from local dealers or factory service reps to speak at meetings on a special subject and “do-it-yourself” projects.

By incorporating, a club can own property and, if the ambition is there, build a special club house ranging from the very modest shack to a deluxe A-frame. A club also can – and many o – build area snowmobile trails for the use of their members and guests, complete with signs, bridges and warm-up huts.

Probably most important, a club can become an effective tool in protecting the sport of snowmobiling from discriminatory legislation, regulation and unjust taxation from their city council on up. Clubs can do a lot to make sure local, area and state laws are not only just, but uniform. As a club grows in membership, it can start thinking about affiliating with major associations state or national such as the USSA, WSA or ASA. At this point, all members become the recipients of a host of other advantages such as special insurance rates and qualification for special competitive event…

Don’t take our word for it that a snowmobiler can be a club member and enjoy it too. Ask one of the “organized” men!