To some of us, the past 20 years seems to have gone by in a flash – a flash almost as fast as Guy Parquette’s reaction time in a drag race in 1994, or like watching Kirk Hibbert blaze by on a laptop cross-country race on the original ISOC racing circuit.

For today’s Throwback Thursday, we turned the clock back 20 years to see who was honored as snowmobile racing’s top dogs in the Snow Week magazine Racer of the Year and Top 10 club. Of the honorees, only one is still racing today. It’s also notable to see how various facets of racing have changed since the 1993-94 racing season. Let’s look back:

RACER OF THE YEAR: Guy Parquette

In the 1993-94 season, this Ski-Doo-mounted drag racer from Wisconsin was super-strong in the ultra-popular grass drag racing scene through the fall before turning his show to the ice, where he won an amazing 45 of 48 Stock class finals, and finished second in the three he didn’t win. That included 5 Stock class titles on 5 different sleds at the World Series of Ice Drags, and he also earned victories all year in Improved Stock on his Glen Kafka-tuned fleet of sleds. THE TOP 10 in alphabetical order

Toby Ashley – Then 25, this Idaho-based racer (and brother-in-law to Jack Struthers) was there when the modern form of snocross racing was in its infancy. He gutted his way to a victory at the season-opener in Duluth, Minnesota, while racing with a separated shoulder, followed it up with a victory at Quadna Mountain, and then headed out to the Oregon Snowmobile Racing Circuit, where he dominated on his Arctic Cats.

Corey Davidson – By now, enduro and cross-country racing fans know this Minnesota-based racer as a sure-fire hall-of-famer for his multiple 500-mile race victories. In 1994, though, he was a free-faced 23-year-old racing Pro 5-prepped Polaris XCRs and earning ISOC victories at Thief River Falls and McGregor before finishing second to Jack Struthers in the cross-country I-500. Davidson is still a force now, 20 years later.

Ken Hallas – Hallas was Parquette’s prime challenger in grass drags at the time, and challenge he did. He won high points honors in 9 of the 11 classes he competed in on the then-huge Southern Wisconsin Drag Racing Association (SWDRA) and won the Minnesota Cup at Haydays. With Russ Lemke spinning the wrenches and Hallas pulling the trigger on a fleet of Ski-Doo Formulas and Machs, this Wisconsin-based duo was hard to beat.

Ivan Hansen – An enduro racing superstar, Hansen won the Michigan Trip Crown on the MIRA circuit, with victories at the historic Soo I-500 as well as the Marquette 200 and the Drummond Island 250. At the eight MIRA races, this Lachine, Michigan-based Polaris rider only finished out of the top 10 once.

Kirk Hibbert – Yes, true snowmobile racing fans know that Tucker wasn’t the first Hibbert to dominate the racing scene. Kirk left his native Idaho, moved to the Upper Midwest and started to clean up on the competition. The 1993-94 season admittedly wasn’t one of Captain Kirk’s best (he was Racer of the Year in the 1992-93 season), but he still easily cracked the Top 10 with a long line of victories and an ISOC season points championship. He also won a main event at every MRP race he attended, went out to West Yellowstone and won a class, and then closed the year with a Trail King Of The Hill title at Jackson Hole, all on his beloved Arctic Cats.

Mike Houle – This Minnesota-based Ski-Doo racer was so dominant in Formula III oval racing that some credit him with ruining the class. Odd as that might sound, there’s some fact to it, because nobody could run with Mike and the Ski-Doo equipment he brought to the track each weekend. In this season, the Minnesota racer won 14 F-III finals (including at Eagle River) and 9 Mod III/Formula II finals (including  Eagle River).

Dale Loritz – This Green Bay, Wisconsin-based oval racer earned his first of two Eagle River World Championships in the 1993-94 season, and was the high point driver in the Formula I class in the Ski-Doo/Dayco Sport series. When the twin trackers were running, you could always count on the strong No. 67 sled running toward the front.

Aaron Scheele – As the now defunct but then powerful MRP racing circuit was transitioning from ice lemans races to snocross, then 27-year-old Scheele was making the same transition. At this point, he wasn’t the natural on the big bump snocross courses he would later become, but when the circuit turned to laketops nobody could touch him or his No. 144 Arctic Cats. He won virtually everywhere, and ended up the high point driver in Pro Stock, Pro Open and Pro Lite.

Jack Struthers – Then 29, Struthers had already earned Legend status, and his string continued in the 1993-94 season when he won his third cross-country I-500 victory in four years on his Polaris. Besides winning “the big one,” Struthers also dominated the Rocky Mountain Cross-Country Racing Circuit with teammate Tim Schelhorn. The Idaho-based racer would run strong for a few more years before retiring from racing to run his family’s dealership in Boise.

Brian Sturgeon – Back in the relative haydays of Stock class oval racing, Sturgeon could hardly be stopped on his Arctic Cats. In fact, in the 1993-94 season, he won an amazing 34 of 36 finals in A Stock, B Stock and C Stock, including being undefeated on his ZR 700 in A Stock. Just for fun, he also showed up at the season-opening snocross race in Duluth and won a class in front of a field of cross-country and snocross pros, showing how multi-talented this Minnesota racer was. 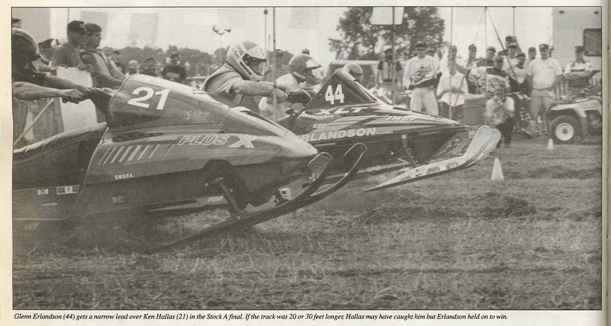