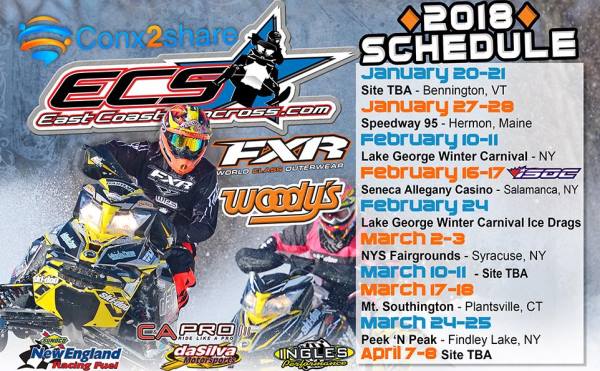 The Massachusetts-based East Coast Snocross (ECS) racing circuit has announced its schedule for 2018, and it includes exciting weekend events scattered throughout New England.

The circuit, owned by Kurt Gagne, has events planned in Vermont, Maine, New York and Connecticut, plus a few dates left open as TBAs. The circuit is getting a rather late start — not holding it’s first event until January 20-21 but then following up with very busy weekends through most of February and March for its loyal band of snocross racers.

Here’s the press release from the East Coast Snocross circuit:

CLARKSBURG, Mass. (Nov. 8, 2017) – Officials at East Coast Snocross (ECS) have released their 2018 event schedule, with a mix of familiar and new host venues on the slate.

“I think we’ve put together a full schedule that will reach a number of important market areas in our region,” series owner Kurt Gagne said. “I’m excited about going to a couple new sites, but I’m  pleased to have several returning venues on the list, as well. I think it’s a good mix for race teams, and I hope folks around the northeast will come out this winter to see what we’re all about.”

An eight-race schedule will see northeastern regional teams visiting four states from mid January through late March. In a slight change from recent years, the season will begin in southern Vermont. The historic town of Bennington will host Round One on Jan. 20-21.

Round Two will see the series visit a new venue in the Pine Tree State. After a three-year run at Bass Park in Bangor, the tour now moves to Speedway 95 in nearby Hermon. This 1/3-mile paved oval facility hosts weekly short track racing all summer, and will serve as an ideal site for snocross.

For Round Three, the series makes a long-awaited return to the beautiful resort town of Lake George, New York, on Feb. 10-11. This race will be part of the town’s huge annual Winter Carnival, providing a big potential audience already in place. Lake George has hosted snocross for many years.

Just one week later, an annual tradition of joining with ISOC continues in western New York. On Feb. 16-17, ECS teams will race alongside the Amsoil Championship Snocross Series (ACS) at the Seneca Allegany Casino in Salamanca. This race draws a huge crowd of spectators every year.

Round Five will take place on March 2-3 at the spacious New York State Fairgrounds in Syracuse. After two straight cancellations due to a lack of snow, officials are hoping that cooperation from Mother Nature allows fans in Central New York a chance to enjoy the excitement of snocross.

The site for Round Six on March 10-11 will be announced in the coming weeks. Round Seven will see a return to the beautiful and friendly confines of Mount Southington. This family-oriented ski area in Plantsville, Connecticut, laid out the Red Carpet for snocross and is also ideal for our sport.

A trip to one of the most loyal and long-term host venues snocross has ever enjoyed in western New York will cap the season. On March 24-25, ECS will conclude the 2018 campaign at the beautiful Peek ‘N Peak Resort in Findley Lake. Hospitality and fan amenities are unmatched at ‘The Peak.’