So you’ve made the decision: It’s time to step up in style, class and function and get yourself an enclosed snowmobile trailer. You’ve had enough with screwing around with frozen or sloppy snowmobile covers, or exposing the sleds to road salt and grime. Plus, maybe you’ll gain some year-round functionality.

But more big decisions lie ahead, including what style of trailer to get. There are many options – from tilt trailers with small covers to large haulers with topnotch features. To help, we offer a comparison between two new, four-place enclosed trailers we used last year: a Triton XT-228 and a Floe Versa-Max Ramp Trailer with a Pro-tektor aluminum enclosure. Their retail prices were similar, but each offered unique advantages that could appeal to different buyers.

For the 2016-17 season, Triton loaned us an XT-228 model from its most price-conscience line of big trailers. The “228” refers to the trailer’s dimensions in feet: 22 being the bed  length excluding the 5-foot front V, and 8 signifying its width. The XT-228 had tuck-under tires and axles, which raised its ride height compared to inline trailers. It had a 6-foot, 6-inch internal roof line and wasn’t necessarily set up for  snowmobiling – it didn’t have channels or bolt holes in the floor for tie-down bars. Instead, it had four flush-mounted D-rings.

Its spec chart listed a 2,275 pound curb weight, with a 3,725 foot cargo carrying capability. It rode on 13-inch ST175/80R13 Karrier Loadstar tires mounted on classy-looking wheels, with twin axles featuring a four-cord rubber torsion axle suspension. Throw in a twodoor cabinet, spare tire and carrier, and it had an MSRP of $12,099 as delivered.

The new Floe-Versa Max Ramp Trailer with Pro-tektor enclosure was a replacement for a very similar Floe trailer we have utilized since 2006. In fact, after picking it up, we marveled at how Floe hadn’t even updated its side graphic in  more than a decade. That seemed odd, but the trailer we replaced was still in fine shape, and the unchanging graphic means it never looked dated.

Our 22-foot trailer featured Floe’s Versa-Lock channels running the full length of the trailer’s plywood deck – clearly a snowmobiling setup. The Protektor cover was securely attached utilizing stainless steel hardware. Its spec weight was 2,077 pounds, with a cargo capacity of 2,665 pounds. Like the Triton, it rides on tandem axles that utilize the same ST175/80R13 Karrier Loadstars tires. Ours included upgraded axles, mag wheels and electric brakes. Throw in the spare tire and its mount kit, and the MSRP was $12,750.

When in use, the trailers had different features that created separation between the two.

Loading the Triton XT-228 was simple. It has a huge, 92-inch wide by 70-inch tall rear ramp door. Simply unlatch it by rotating the cam-arm enclosures, then give the door a hearty tug. It’s heavy but a coiled overhead spring provides assistance.

Before loading, an attached plywood flap had to be rotated down to ease the transition between the ground and the squared-edge of the door’s top. A 62- inch wide by 64-inch tall front ramp door allowed us to drive off the front, though its narrow width required us to reposition the sleds as they were being driven off.

When inside the trailer, there was no stooping required, thanks to a ceiling that measured 80 inches at the center and 79 inches where the ceiling met the outer wall. That was a much appreciated selling point, offering plenty of room to walk around inside, change into riding gear, oil up the sleds or handle other tasks.

Securing the sleds to the trailer deck was another matter. Because there were only D-rings, we spent a lot of time with tie-down straps. Frankly, it was a bit of a hassle because the D-rings weren’t positioned exactly where desired and it made us long for traditional tie-down bars.

Our trailer came with plywood kick plates that went a few inches up the inside of each trailer wall, helping to protect them; that narrowed the inside floor width to about 97 inches – still wide, but  not wide enough to put two modern, trail-width snowmobiles side-by-side. Still, we had enough length to stagger the sleds and easily fit four inside.

Quality features included two interior ceiling lights, plus a four-foot wide storage cabinet. A walk-through access door on the driver’s side and a small fuel door made for easy gas stops. There was also a crank-up roof vent.

Loading and unloading the Floe Versa/Pro-tektor combination was also quite easy, though it involved notably more bending and stooping. To access the interior, a user turned the locking handle on either the front or rear gull-wing door and pulled up, allowing the door to swing toward the sky. Two narrow gas shocks on each door assist in lifting and kept the door open.

Next, the user had to retrieve the ramp that is stored beneath the trailer deck. The ramp, which is rather heavy and clumsy, can be placed on either side of the trailer on the front or back, so sleds can be driven on or off.

The biggest detriment to the Floe design was the ceiling height. It measured 52 inches to the bottom of the crossbeams, resulting in a lot of stooping- over when riding a sled on or off the trailer, and when walking inside to tie down sleds, add oil or do other tasks. It seriously limits the functionality of the trailer. Also, those who use extra tall windshields should beware of this height.

The Floe Versa-Track tie-down system is rather slick, with tie-down bars integrated with the aforementioned channels so sleds can quickly be secured anywhere along either side. Once the sleds were inside, the user would pull down the two big doors – sometimes lining the door edges up in their channel took a little wiggling, but never more than 30 seconds. Once in place, the handle on each door could be twisted in place, plus locked if so desired. A nifty little cap fits over the lock handles to prevent icing.

Vents high on each gull-wing door allowed air to pass through the trailer. The two easy-to-open end doors plus a short access door midway down the body made fuel stops quick and easy. Due to its 102-inch outside diameter and 100- inch inside diameter, the Floe easily carried sleds in a side-by-side arrangement – the slight width difference between these trailers made a big difference.

For comfort and ease when loading and unloading, the tall-roofed Triton was the obvious choice, but things got more complicated once these trailers were pointed toward a distant trailhead.

In what should come as no surprise, there was definitely a price to pay for the larger and taller Triton. Even on relatively windless days, we could feel  it back there much more than we could the Floe. The tall trailer’s V-shaped nose helped to minimize the impact, but the overall height of the trailer was 9 feet, which meant it towered above our F150 and had to punch its own hole in the air.

On a windy day the issue was multiplied. Whether driving into the wind, catching side winds or coming up behind a semi/tractor-trailer, the tall Triton would sway and buck more. It wasn’t out of control, but it’s just the reality of having a taller sail behind your truck.

The lower-cut Floe had a measured height of 84 inches – 24 inches shorter than the Triton – and a rounded shape that tucked nicely behind the tow vehicle. It cut through the wind with significantly more poise and handled side winds easier. It felt like a well-trained dog – following its tow-vehicle master’s lead without pulling on the leash.

On back-to-back riding trips to Michigan’s Upper Peninsula and back, driving the same route with the same tow vehicle, we experienced a 2.1 mpg difference between the trailers. Admittedly, we couldn’t control every variable – it was windier when we towed the Triton – so the 2.1 mpg gap may vary, but there was definitely a notable difference in our mileage and range.

When we ran the pros and cons past the people on our riding trips, most said they’d choose the Triton XT-208 because they loved the fact that they were able to stand in the trailer and change or work on sleds. Plus, they felt it was a better year-round trailer due to it ramp doors – for instance, if hauling UTVs in the summer or helping a friend move. For them, the trade off in fuel mileage, towing ease and clearance was well worth it.

Other friends had different needs and perspectives that made them favor the Floe Pro-tektor setup. It was easier to tow, would more easily tuck beside the garage and out of the way and, more than anything, the Floe just caused a more relaxing towing experience.

For me personally? I’d opt for the previous year’s Triton Prestige PR-227 inline due to narrower profile and lower ride height, but I’m an inline-trailer apologist. 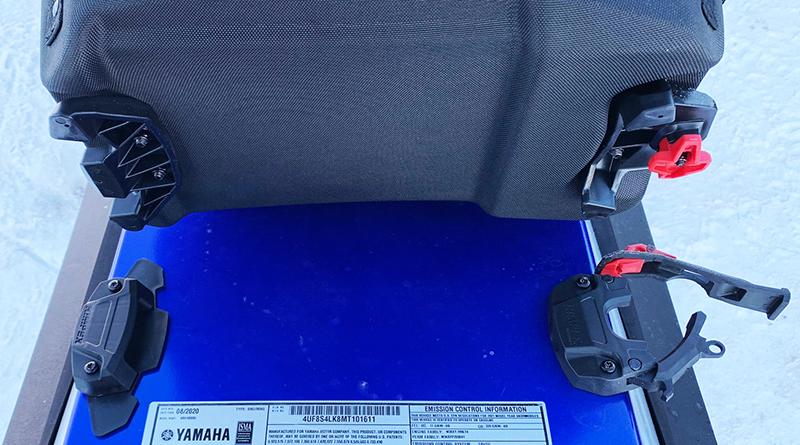