Today the ball dropped with Yamaha being the first manufacturer to unveil its 2015 snowmobile lineup. Highlights include a new model for the mountains, revised skis and special models only available for order this spring.

When Yamaha unveiled its 2014 lineup a year ago with some snowmobiles based on a chassis designed by Arctic Cat, that move helped to modernize the brand’s lineup with a newer, better platform for performance riders. But without a new mountain sled based on that platform for 2014, Yamaha riders were left high and dry. Fortunately for those people, Yamaha has three new mountain models in its 2015 line — plus one special edition model available during the spring Power Surge program.

In developing this new mountain sled, Yamaha engineers set out to design one that’s maneuverable and controllable, lightweight yet durable, and it had to be powered by a reliable engine that could be boosted.

The  Genesis 3-cylinder, four-stroke engine will power the new 2015 Yamaha SR Viper M-TX models. For the uninitiated, the fuel-injected engine is rated at about 135 hp and has been powering FX Nytro models since 2008. With the discontinuation of the Nytro line after model year 2014, the engine is only available in the SR Viper line.

In most ways this is an Arctic Cat M sled with a Yamaha engine and clutching system dropped in, but several adaptations were made to balance the snowmobile. Compared to past M sleds, new, taller rear suspension rails with a revised profile will allow the use of a one-half inch longer Fox coil-over front shock, and the torque arm will be mounted about a half-inch higher on the rail for more compliant suspension performance.

A vertical steering post provides more leverage when sidehilling and carving. A new seat has a narrow profile that’s tapered toward the fuel tank for easier rider mobility, and the overall length is short to reduce interference when riders swing a leg over from one running board to the other. Ski stance is adjustable between 38 and 39 inches.

Other parts on the Viper M-TX’s equipment list include a magnesium chaincase cover, Extrovert driveshaft drivers and wide, single-keel mountain skis. Coil-over shocks are standard all the way around on the M-TX 153, but both M-TX SE models get Fox FLOAT 3 shocks over the skis and a FLOAT 2 damper on the rear arm. Color options will be red/white or blue/white for the SE, and all black for the standard M-TX.

Tuner skis quietly debuted in the 2012 Yamaha snowmobile accessories catalog, and then they became a standard feature on trail-oriented FX Nytro models in 2013. For 2015, all trail-based SR Viper models will be fitted with the new Deep-Keel Tuner skis. A more aggressive bite and improved loose-snow performance is a result of a keel that’s 5mm deeper than Tuners that were used in 2013 and ’14. The keel angle is steeper, too, for better penetration into the snow.

Model names have been revised for 2015 Yamaha snowmobiles. Late-model sleds have relied on letters to define a model’s specific package, such as SR Viper RTX or Phazer XTX.  For 2015, Yamaha marketers added a hyphen and, in some cases, added a couple more letters. So now it’s a Phazer X-TX, or RS Vector L-TX, for example. All 129-inch Yamaha SR Vipers are RTX models, but also include either DX or SE, depending on features.

The on- and off-trail segment has a new player as Yamaha enters with its new SR Viper S-TX DX. The segment was first defined by Polaris in 2012 with the 600 Switchback Adventure and then followed up by Arctic Cat with its XF CrossTour models in 2013.

Though each company has its own interpretation of how the sleds should be equipped, long-track trail sleds that have expanded cargo capacity, more wind protection and other comfort/convenience features loosely define the class.

For 2015, Yamaha is essentially taking the XF 7000 CrossTour that debuted last season with the Yamaha Genesis 3-cylinder engine, and adding a heated seat and its own clutches. The SR Viper S-TX DX will have a 15- by 141- by 1.352-inch Cobra track, Fox FLOAT 2 rear shock, modular rear bumper with rack, large trunk bag and the new Deep-Keel Tuner skis. An accessory passenger seat with footrests and large storage bag will be available. Color options are all black or red and white.

Four limited edition models will be available this spring during the Power Surge promotion. They are distinguished by an orange and blue color scheme, and special suspension and traction features.

Here is the full list of 2015 Yamaha snowmobiles, along with what’s new for each model. Machines with an asterisk are only available for order through the spring Power Surge program: 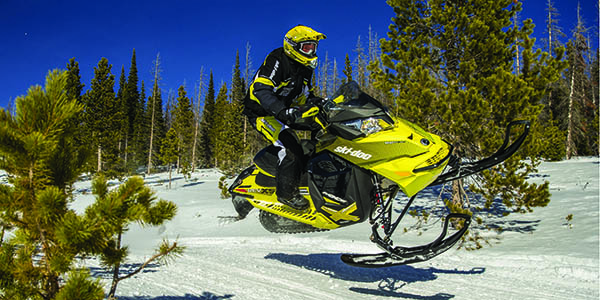